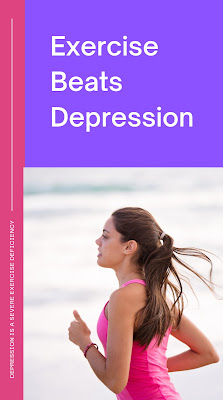 A study by the Black Dog Institute showed that "people who have suffered clinical depression believe that of all the therapies and techniques (not including drugs and psychotherapies) it is exercise that helps the most, followed by yoga/meditation, relaxation and massage."

I've seen studies like this before with similar conclusions, and I've never seen one that refutes this claim. One way to look at it is: Exercise beats depression, as if exercise were a kind of drug. Another way to look at it is that the lack of exercise is unnatural. In other words, depression is a side-effect of a severe exercise-deficiency.

It's something to think about, anyway. At least it's something to try that won't hurt and has other positive benefits even if it doesn't completely lift one's depression. If you know someone who is depressed or discouraged, send them this article, and also the article, Undemoralize Yourself.

Exercise works for all of us. Even if you're not depressed, a little exercise usually raises your mood. It's an all-purpose mood raiser that just about anyone can use. If you haven't exercised in the last couple days and you're not feeling as good as you would like, try doing some exercise today and see if that helps. I'll bet it will.

For Depression, Prescribing Exercise Before Medication

Evidence of Exercise as an Antidepressant Growing, but Underrecognized

Is Exercise a Viable Treatment for Depression?

Exercise is an all-natural treatment to fight depression

Running From the Pain: Exercise can be a very effective way to treat depression. So why don’t American doctors prescribe it?

Is the Comparison between Exercise and Pharmacologic Treatment of Depression in the Clinical Practice Guideline of the American College of Physicians Evidence-Based?