Integrity is Not For Sissies 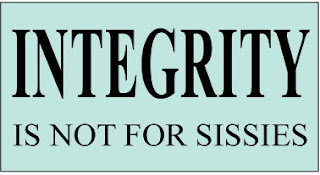 If you were going to make a list of outstanding examples of people of integrity, who would you put on the list? My top people would be Gandhi, Lincoln, and Socrates. Many people would add Martin Luther King, Jr. and Jesus.

Besides being moral exemplars, what else do they have in common? They were all assassinated, executed, or forced to kill themselves.

The point of this grim post is that integrity is not for sissies. If you strive for integrity, some people will really not like it. Integrity is not a way to become popular.

On the other hand, other people of integrity will be strongly attracted to your integrity, so it's not a road to unpopularity either. All five of the moral exemplars above had lots of popular support. But they didn't win over everyone and didn't even try. They had enemies, and that is inevitable when you live with integrity. Some people won't like it.

One of the most ugly and repugnant things about politics is that politicians are trying to win over everyone and offend nobody. And that cannot be done with integrity.

When you feel a conflict between living with integrity and living a frictionless life, or when you are motivated by your own integrity to do something and someone finds it wrong or offensive, it's a good idea to remind yourself of this: You're not alone and you're in good company. Remember that.