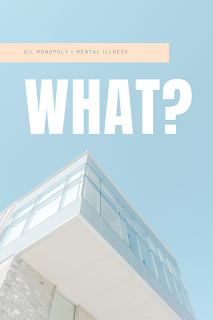 I was talking with the director of a large mental health hospital during the financial crisis of 2007-2009. When I talked to him, they had just finished building a new wing of the hospital, and he said they'd been extremely busy since the Great Recession began. He told me something I've never heard before — recessions always initiate a steep rise in mental health problems.

I must have looked surprised. He explained, "Well, people lose their jobs, which causes stress, and sometimes they lose their houses too. Under the strain, couples get divorced. Depression and anxiety increase. Anger and frustration rear their ugly heads. Sometimes people deal with it by drinking too much or taking drugs, and that causes even more problems. Sometimes the stress can trigger the onset of latent problems like psychosis and schizophrenia."

All of this got me to thinking. Since every time oil prices have spiked since WWII, we've had a recession in the United States, and since recessions cause more peoples' lives to fall apart, and since we could prevent rising oil prices from causing recessions if we had sufficient fuel competition, then it is not unreasonable to assert the following:


Or at least the oil monopoly plays a causative role in triggering a greater number of mental health problems than would otherwise have occurred.

So we can chalk this up as yet another good reason to stop the insanity of perpetuating a one-fuel economy. In addition to increasing our national security and boosting our economy, fuel competition can help keep our citizens mentally healthy. In addition to curtailing the money going to prop up dangerous women-oppressing regimes, lowering the amount of lobbying and influence the oil industry enjoys, helping to solve our garbage and landfill problem, helping people in developing nations rise out of poverty, and reducing the amount of pollution and greenhouse gases sent into the atmosphere, into the ocean, and into the ground, fuel competition can also literally make the world a saner place.

Adam Khan is the co-author with Klassy Evans of Fill Your Tank With Freedom and the author of Slotralogy and Self-Reliance, Translated. Follow his podcast, The Adam Bomb.