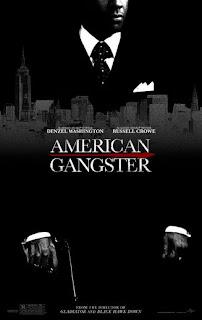 I just watched the movie, American Gangster, which was inspired by a true story, and I was struck by the consequences of a single act of integrity. Russell Crowe plays Richie Roberts, an honest cop in New Jersey surrounded by cops on the take.

Early in the movie, Russell Crowe and his partner find almost a million dollars in the trunk of a car owned by a drug dealer's accountant (this is in 1968). Nobody is around when they find the money. Roberts' partner wants to keep the money. Nobody will know.

But Roberts turns it in.

Later, the police commanders and other higher-ups were looking for a cop to lead an elite narcotics squad. They chose Roberts. Why? Because this elite squad was going to go after the really big drug dealers and smugglers, and to do that, those cops would buy and sell large quantities of drugs using large amounts of money. The higher-ups needed someone they knew they could trust.


The movie seemed to be a demonstration that when you can be totally trusted, opportunities come your way undreamed of by people less trustworthy. And that integrity may make you less effective in the short run, but it will reward you with strength and power and supreme effectiveness in the long run.
Posted by Adam Li Khan at 2:26 PM