To Thine Own Self Be True and Happier You Will Be 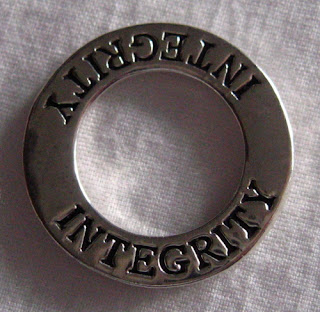 One the the most influential books I've ever read on integrity is Lewis Andrews' To Thine Own Self Be True. He is a psychologist and his main message is that many of our most common "psychological problems" have their roots in unethical behavior.

In other words, one valid and productive way to approach problems like anxiety, depression, guilt, and anger problems is to ask, "Where are you violating your own integrity?" And he has a good deal of evidence from scientific studies to back up this perspective.

I have found the perspective helpful. It has been productive to respond to emotional issues by exploring my own integrity.

For example, if I feel bored and restless, it's likely I am doing something I don't really feel is important because I feel I should (or someone has convinced me it's a good idea), but my heart isn't in it.

Elvis was doing that with his music and movies. His manager was coercing him to act in movies Elvis thought were stupid, and getting him to sing songs Elvis didn't like. And what was the result? Elvis suffered from a deep boredom and the empty feeling of just going through the motions. He didn't have a feeling of being alive.

It was an integrity issue. He was not being himself. He was doing what he was told. He was conforming. He was selling himself out.

Here's another example: If I feel guilty for not spending enough time with my wife, a good first response would be to look at my integrity. Where am I violating my own integrity? What do I think ought to be done? What's the right thing to do? How can I restore a sense of honor? Where am I lacking courage?

If I find some answers to those questions, I have found a good way to remove the guilt. Once I have put those answers into action, the guilt will probably disappear. I have restored my emotional health, then, by restoring my integrity.

Andrews' approach is worth exploring. I think you'll find it a productive question to ask when you have any chronic negative emotions: "How is my integrity doing?"