The Surprising Answer to Overpopulation 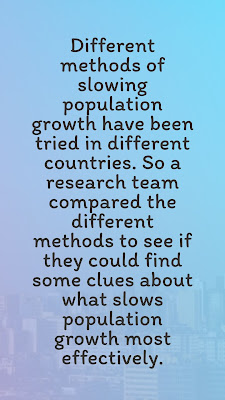 Underlying almost every major global problem we have is overpopulation. The oceans are overfished because people need to eat and the human population keeps growing. Same with the destruction of rainforests and other natural environments, including most of the forests on earth. Animals are going extinct. More and more land is covered with asphalt, concrete, and buildings — land that would have had something growing on it.

Pollution, overflowing landfills, groundwater contamination, water shortages, starvation, global warming, mineral resources getting more difficult to obtain, dead zone proliferation, and so on — our population is growing so we need more natural resources and more land, and we produce more and more waste.

But the topic of overpopulation is something people don't want to talk about because the solutions to the problem that come to mind are undesirable or unthinkable — things like forced sterilizations or coercive, rights-denying national or international policies.

But a research finding reveals another possibility.

This finding was discovered because many governments around the world are exceedingly concerned about their own overpopulation because in most cases a bigger population means more poverty. "In developing countries," writes Wardatul Akmam, "overpopulation is considered to be one of the most basic causes of underdevelopment."

The researchers John Casterline and Steven Sinding found that simply giving women more rights works better at lowering population than any of the coercive methods (China's policy of heavily taxing parents who have more than one child, for example, is considered a "coercive" method).

It turns out that most women don't want to have eight kids. If women have the option and freedom to choose, by and large they do not choose to have large families. When they have the right to decide their own fate, they also don't usually elect to quit school or be forced into marriage by their parents or marry young or have children early (especially in places where a woman has a real chance of dying during childbirth). But all of these things happen in countries where women lack basic human rights, and they all add up to population growth.

This is a monumental finding. Think about the implications of this study. Something that is good and right and should happen anyway — women getting human rights where they now don't have them — also happens to solve humanity's biggest problem. This might be the best news you've ever read.

Steven Sinding is former head of the Population Sciences program at the Rockefeller Foundation. He says they discovered this surprising fact when were looking at the demographic and health surveys in different countries, trying to answer the question: How many women would use contraception if it was available to them? Sinding says, "I looked at the level of unmet need and asked, if we could satisfy all the need that was there, what level of contraception use would you have compared with the targets that the countries had set for their demographic goals?"

In other words, they looked at countries that already had set goals for slowing their population growth and already had government programs in place to achieve those goals. The researchers discovered that if the women in those countries had enough human rights that they could choose to use contraception, and if contraception was available, it would lower the population better than any coercive program any government has ever tried.

In the book, Champion of Choice, a biography of Nafis Sadik (executive director of the United Nations Population Fund), the author describes the shift in the U.N.'s policies that ensued from this discovery:

The result of these years of analysis meant that heading into Cairo, Nafis presented a fundamentally different paradigm from the one that had been considered at past population conferences...This tectonic shift in theory came from the concept that both agendas referenced in the name International Conference on Population and Development would be conveniently solved by the same action: the empowerment of women.


And the most important fundamental factor that empowers women is education. "In my opinion," says Sinding, "the basic problem of women as far as their role and status is concerned, arises from the fact that they have no control over their fertility and that is used to keep them out of everything else."

In many countries, girls are not educated or their education is cut short. The common assumption is that the girl will get her economic security from her husband, so she doesn't need an education. "So no matter how brilliant the girl might be," says Sinding, "she's not given a chance. And from that so many things happen to her: she is not educated, she is not able to be independent, she does not know her own rights, she doesn't know much about her health, and all that. She is married off at a young age, and then no matter how mistreated she might be by her husband and her husband's family, she can't really get out because she doesn't know what to do with herself. She can't go out and earn a living because she is not prepared..."

These women shouldn't have to live that way. And by solving that problem, we simultaneously solve our biggest environmental problems. Overpopulation is the wellspring of most of the world's problems, and the most effective solution to overpopulation is women's rights. Specifically, education for women.

The good news is that there are already many organizations around the world working to accomplish these goals (see links below) and they need all the help they can get. These organizations need three things: Money, volunteers, and publicity.

And you can provide all three.

Volunteer: Many of the local events of these organizations need local volunteers.

Publicity: You are a center of influence, whether you know it or not. I'm sure you've heard of the concept of six degrees of separation. It applies to you. What you share with your friends and family and what you share on your social media makes a difference. You influence people. You can make more people aware of these organizations and why their work is so important. You never know where or who or how far your influence will reach.

Here are some of the organizations empowering women, working to give women rights where they now don't have them, and/or helping to provide education for girls. Please help them: