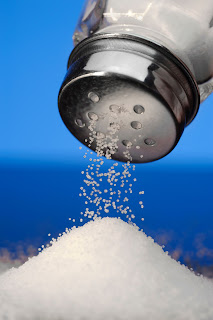 The following is excerpted from an article entitled, "Shaking up the Salt Myth: The Dangers of Salt Restriction," by Chris Kresser. Read the whole article here.

Many proponents of the Paleo diet suggest limiting salt based on evidence of low salt intake during the Paleolithic era. This limitation meshes with recommendations made by various health organizations, such as the USDA and the American Heart Association, who suggest limiting sodium to at least 2,300 mg per day and even as little as 1,500 mg per day. And if our Paleolithic ancestors ate a low salt diet, then it certainly must be healthy, right?

Not necessarily. Recently, evidence has been mounting against universal salt restriction guidelines. A low-salt diet may cause serious health consequences and higher overall mortality, especially in the presence of certain chronic health conditions and lifestyle factors. In this article, I will discuss scientific evidence that contradicts salt restriction recommendations, as well as potential health risks of consuming a diet too low in salt.

Conventional healthcare experts have been recommending salt restriction ever since the 1970s, when Lewis Dahl established “proof” that salt causes hypertension. In his research, he induced high blood pressure in rats by feeding them the human equivalent of over 500 grams of sodium a day; 50 times more than the average intake in the western world. Dahl also invoked evidence that cultures consuming higher levels of salt tend to have higher blood pressure than those who consume less salt.

However, when Intersalt researchers investigated this possible association, while controlling for confounding factors, the correlation between blood pressure and salt intake almost disappeared.

Read the rest of the article here.
Posted by Adam Li Khan at 1:28 AM

Email ThisBlogThis!Share to TwitterShare to FacebookShare to Pinterest
Labels: Improve Your Health