A Four and a Half Day Water-Only Fast 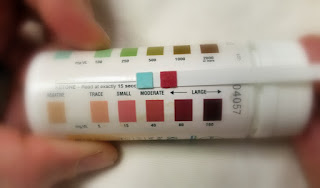 I just finished a four and a half day water-only fast. My last meal was at 2AM on a Thursday morning. I broke the fast at 5PM the following Monday. So I fasted 111 hours. I could easily have gone longer. I felt fine. The photograph here is of the Keto-Diastix measurement about ten minutes before I broke the fast. Starting on the morning of the fourth day, this is where my ketone level stayed — a little above moderate.

When I first started the fast, my only goal was to go longer than three days because I have read in several places that it takes three days for your body to switch to the different fuel source (ketones), and if you have enough fat on your body, you have plenty of fuel, so you don't feel so hungry. I was skeptical about this because on the three day fasts, I got progressively hungrier every day.

I had some minor muscle cramping on the first three days, especially when I was dehydrated. I conducted this fast during a hot spell. On the one hand, this was a good thing because I usually feel cold when I fast. This time, while people around me were very hot, I was feeling comfortably cool. My joints ached a little. I felt low on energy, but when I moved around I felt fine. I just didn't feel like moving around.

During the first three days, being around food was a kind of mild torture. Even seeing pictures of food on Facebook and television got my stomach rumbling. I ended up avoiding FB and TV. For me, I found it is better not to think about food.

I also don't like to do much physically when I'm fasting. I have energy if I need it, but it makes me feel a little wiped out afterwards, so I prefer to just read and write and talk and watch movies during the fast. I stay busy, but avoid too much physical work. On this fast, I napped once a day and sometimes twice. I tend to sleep very well when I'm fasting.

I discovered that I was definitely less hungry on the fourth and fifth days. I was feeling so good, late on the fourth day I tried some exercise. I had been lying and sitting so much, I felt the need to be move around a bit. I did some yoga and it felt really good. I felt good afterwards too. Then I did some easy lunges without weights, but I almost instantly felt tired and weak and it didn't feel good to continue, so I stopped. The next morning I still didn't feel good. I was going to drink some juice (I had tomato juice and pomegranate juice in the fridge in case I needed it) but I thought I'd try water first. I drank three glasses of water and laid down for awhile to see if that would do it, and it did. I felt better. I didn't need the juice.

The fourth day was so easy, I decided to go six days, but I got called into work, so I broke my fast. I don't feel very energetic on a water-only fast, although my mind is crystal clear — in fact, my mind feels sharper than usual. But I need energy at work, so I broke the fast.

Forty-five minutes after I broke the fast with some watermelon, I jotted down this note: "I felt instantly better when I ate. But I would estimate that I only feel 20 percent better than I already felt. It's not that big of a difference." I was already feeling pretty good. But I thought it was worth noting, because it was surprising. You would think you'd feel a lot better after eating.

Another interesting thing: The day after the fast ended, my blood pressure was 96 over 63. That's the lowest it's ever been. It is normally around 120 over 80.

Also, for several days after the fast, my mind felt clearer and my energy level was higher than usual.

Overall, I was encouraged to go for longer fasts because it was so easy after the third day.