Influence by Asking a Good Question 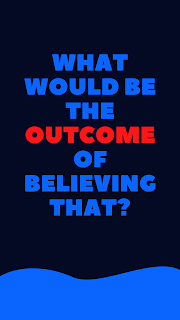 When I hear someone make a pessimistic statement, I often ask them a question I learned a long time ago: "What would be the outcome of believing that?" I've probably asked that question a hundred times. It always makes people think.

Sometimes they're not sure what I mean, so I say, "Don't you think it's possible that if you repeat something often enough you could eventually believe it? And if you believed it, that might have consequences like higher anxiety or depression?"

And I sometimes even go further and ask yet another question, "Did you know there are health consequences to thinking pessimistically?"

You don't have to change anyone's opinion immediately. In fact, if you try for that, you'll probably be less likely to change the way they think than just asking the question and then listening, and saying nothing more.

This is one of several ways to influence the people around you to become less pessimistic.

If you feel like asking this question of the pessimistic ones around you, I would love it if you would try it out and come back here and leave a comment on what happened.

Adam Khan is the author of Antivirus For Your Mind: How to Strengthen Your Persistence and Determination and Feel Good More Often and co-author with Klassy Evans of How to Change the Way You Look at Things (in Plain English). Follow his podcast, The Adam Bomb.