Masculinity Has Been Neutered — Here's How It Happened 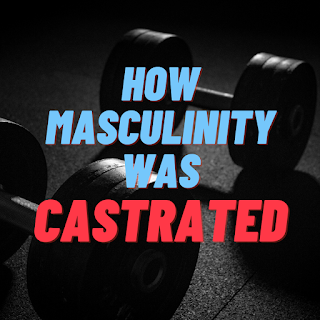 A lot has changed in the last 200 years, and a lot of it has been great. But some trends have had negative consequences.

Robert Glover has a PhD in family and marriage therapy, and he's been a therapist for a long time. Over twenty years ago, he started noticing a consistent pattern in many of his male clients that he eventually named "The Nice Guy Syndrome." It is a combination of thoughts and behaviors that distance these men from their own masculine nature.

He noticed it because he himself was a Nice Guy. He has been helping men recover from Nice Guy Syndrome for a long time now, and working to make others aware of the problem.

The reason it's a problem is that Nice Guy Syndrome prevents men from living up to their full potential, it makes their relationships with women difficult, it ruins their sex life, and it produces a lot of frustration.

How did this syndrome come about? Because society has changed in several important ways. The following are some of the changes that led to men becoming disconnected from their natural masculinity:

1. Only a century or two ago, most boys grew up on a farm. So a boy was around men a lot — not just his father, but also his grandfathers, his uncles, and his older brothers and older male cousins. That changed with the industrial revolution. Men went off to work. Boys were left in the care of their mothers.

2. Along the same lines, people moved from farms to cities, which caused boys to have less contact with adult males. The reason this is important is because as a boy grows up, he is developing psychologically and emotionally with a male brain (developed in the womb) and male hormones (read more about that here), and he's supposed to learn how to deal with those by being under the influence of older men. That's how men learn to be men. That long lineage of wisdom passed down through the generations for hundreds of thousands of years has now been largely cut off by these social changes, leaving boys to be taught how to be men by women, people who don't have those hormones or that brain structure. It disconnects those boys for the rest of their life from their innate masculine nature.

3. Another big change has been a lot more divorce, leading to more boys being raised by a single parent, usually the mother. As the boy develops, masculinity is being defined by a woman.

6. Another factor that Robert Glover identifies as influential was the Vietnam war. Young men distanced themselves from older men by rejecting the "establishment." A serious riff opened up between men who had proudly fought in World War II and their sons who tried to get out of fighting in Vietnam. Their fathers couldn't believe it, and rejected their sons. And their sons grew up rejecting everything their fathers represented, and raised their own sons accordingly.

7. In many of the single parent households run by a mother, the mom made the dad wrong and tried to make sure their sons didn't grow up to be like him.

I would add to Glover's list that people move away more now than they used to. People are far more mobile than they were only fifty years ago, so if your parents moved you away from your hometown when you were young, they prevented you from having the influence of your male uncles, cousins, and grandfathers. It happens to a lot of people. It happened to me, and, in fact, it is still happening. I live in Seattle, for example. My uncles live in Northern California, Southern California, and Nevada. One of my male cousins lives in Southern California, not in the same city as my uncle. My other male cousin lives in Montana. My father lived in Arizona while he was alive. My brother lives in Europe most of the time. (He actually lives everywhere. He wrote a book about it. Check it out. It's called Gastronomad.)

My nephews live in Northern California and Las Vegas. My son lives in Thailand. All of the males in my family are separated from each other. Our influence on each other is therefore limited.

This kind of mobility has been happening for decades. Whatever natural comfort and familiarity boys might have gotten about their own masculinity from hanging out with older males never happened because those older males were not there. Instead, maleness has been influenced and defined by mothers and female teachers.

Another factor Glover doesn't mention, but I think is worth noting, is fewer offspring. People are having fewer children than they used to, so there are fewer older male cousins, and fewer or no older brothers, and fewer uncles.

The result of all this disconnect between boys and masculinity is that those boys grow up to be Nice Guys who repress their own natural masculinity — their inborn ways of being, thinking, feeling, behaving, because they have the impression it isn't good.

The result is men who don't know how to be men, who suspect and deny their own masculine proclivities, and it really interferes with the natural order of things in a relationship between those men and their female significant others.

Have you ever seen the movie Bedazzled? In one scene, Brandon Frazier plays a man who is an extreme SNAG (Sensitive New Age Guy). He's sweet, kind, caring, thoughtful, emotionally vulnerable, etc. He is exactly the kind of person that a doting mother would want her sweet little boy to be. And it is driving his girlfriend absolutely crazy. She's somewhat conflicted because he is what she was hoping a man could be, but now that she's actually dealing with it, it's driving her crazy. She cannot be attracted to him. It is unnatural.

Finally, in a fit of frustration, she bursts out with the honest truth: "I just want to be with a man who will ignore me and take me for granted, and who is only pretending to be interested in who I am and what I think so he can get into my pants..." Sometimes something is funny because it's a truth nobody wants to say out loud.

What can be done about this? If you think you have Nice Guy Syndrome, you are certainly not alone. You can recover from it, and it's well worth the trouble. Overcoming it will make you more relaxed, at ease, comfortable in your own skin, happy in your relationship and with your sex life, and fulfilling your potential.

The first thing to do is read Robert Glover's book, No More Mr. Nice Guy. He has several suggestions to help you recover from the syndrome. One of his recommendations, for example, is to hang out with men more often — especially men who grew up with fathers, uncles, and grandfathers around. They have absorbed what used to be absorbed in every generation.

One of the more interesting suggestions Glover offers is to stop doing favors for your woman. Nice Guys are driven to gain approval from the women they love. This is what they were trained to do. And the effort to stop doing things for your woman makes it painfully clear that this is a compulsion of yours. Overcoming that compulsion will go a long way toward helping you recover.

If your masculinity has been neutered, it was done by indoctrination, and can be undone by you. You'll be happier if you do.

Listen to this as a podcast here.

Adam Khan is the author of What Difference Does It Make?: How the Sexes Differ and What You Can Do About It, Principles For Personal Growth, Direct Your Mind, and co-author with Klassy Evans of How to Change the Way You Look at Things (in Plain English). Follow his podcast, The Adam Bomb.

Email ThisBlogThis!Share to TwitterShare to FacebookShare to Pinterest
Labels: Relationships