Direct Your Mind: What If It Really Happened? 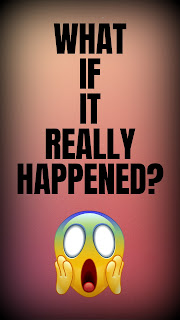 Edna Foa conducted research on social anxiety to find out what helped the most to reduce anxiety. The answer was changing the way a person thought about consequences. That was the key to whether someone succeeded or failed to manage their anxiety.

Specifically, anxious people expect the consequences of a negative event to be worse than they would actually be. And of course this makes them more anxious than they need to be.

When you worry about something, you’re asking yourself, “What if?” You wonder, What if X happened? And you think the consequences would be terrible. That’s what scares you. What if it happened?

What I’ve discovered I do (and apparently I’m not alone) is stop right there. I don’t think beyond it. I worry, “What if that happened?” and it scares me so much I don’t want to think any more about it. But when I make myself follow through on the question, my anxiety is usually cured in short order. Let me give you an example.

When my wife and I first got married, whenever we had an argument, it made me very upset. I was always afraid the argument would bring our relationship to an end. My question was, “What if she leaves me?” It sounds stupid now, but I never once thought beyond that. It was too awful to contemplate. This is the woman with whom I share all my dreams. This is my best friend. This is the one I love with all my heart. It was too terrifying to think any further than her leaving me.

This worry put me in a panic, and usually my desperation to prevent an impending disaster would only make our fights worse. I wouldn’t let us take a break. She wanted to leave and go for a walk. I wouldn’t let her go until we had resolved our argument. Of course, it is almost impossible to resolve an argument between two people when both are upset, so my actions prolonged our arguments and made them more destructive.

One day I asked her how she managed to stay so calm when we argued. I always seemed to get intense, but even when she was mad, she never got anxious or desperate.

“Do any thoughts go through your mind when we’re arguing?” I asked, “Do you say anything to yourself? Do you picture something?”

Turns out, she did something very specific. She did it every time and it kept her calm. She never thought of it as a “technique.” Like me, she also had the thought, “What if this is the end of us?” But she didn’t stop there. Rather than recoiling from the thought, she faced it. She deliberately imagined the worst that could happen. She tried to see a little movie in her mind of what would happen if we divorced. She imagined going through the sadness, moving to a different place, and going on with her life.

And as she imagined time passing, she could see that she would survive, and even if this tragic thing happened, there would actually be some happiness down the road.

This seemed like a pretty straightforward technique, so I gave it a try and it really calmed me down. Our fights became less intense because I wasn’t trying so hard to stop the fight (try to end an argument quickly and it will often make the fight last longer).

Imagining the worst does two things: First of all, imagining a divorce and us moving away from each other always makes me sad. No matter how angry I am when I start thinking about it, I always feel sad because I realize how much I would miss her. That is a good realization to have during a fight. It’s a perspective that sometimes goes out the window when I’m angry, and it’s worth remembering.

The second benefit is realizing that even if this worst-case-scenario happened, I could still go on and be happy. That helps me keep the situation in perspective and helps me calm down. And my lower anxiety helps me listen. It helps me speak more calmly and kindly and sanely.

I tried it the very next time we had an argument. It worked beautifully. It may have been the first time we ever argued when I stayed relatively calm. I didn’t panic at all. I didn’t get desperate. I tried it again the next argument. And the next. And that’s about all it took. That was more than 25 years ago, and I now never even consider the possibility that an argument spells doom. It totally cured me of that particular anxiety.

All I did was think beyond the original fear. Try it with one of your fears right now. You’re afraid of what? What makes you afraid when you think about it?

Jim says, “I get nervous at work because I’m afraid my boss is going to get mad at me.”

Jim: “It would be upsetting.”

Jim: “He might write me up. That means it would be a warning, and one more and I’ll be fired!”

Me: “Okay, let’s say that happens. He writes you up, you don’t improve, and then he fires you. Then what would you do?”

When you follow the line of questioning, it always seems to peter out into nothing. You realize you could handle it. You’d live. It wouldn’t be catastrophic. It may be difficult. It may be inconvenient. It may be a challenge. But it’s nothing to get distraught over.

According to the research, the two biggest mistakes anxious people tend to make is that they think the bad thing is more likely than it really is, and they think if the bad thing happens, the consequences would be more horrible than they really would be.

This is the antidote: Ask the question, “What would happen then?” and keep following the realistic consequences out to their probable natural conclusion, and your fear usually fades or disappears.

I need to warn you about something. Please remember this: It won’t work to tell yourself, “It’ll be okay.” I’ve tried it and it doesn’t have any impact on my anxiety. You must go through the visualization. You must see it happening and see how you’d handle it. Be honest in your imaginings. Try to make it true-to-life. Don’t try to imagine it more positively than you really think would happen. That’s not the point. What do you think would really happen? Imagine it. And what do you think you’d really do about it? This will have a definite — and maybe even a dramatic — effect on your feelings.

Like a magic bullet, it goes to the heart of your worry and dissolves it.

In his book, How to Stop Worrying and Start Living, Dale Carnegie tells the story of a man who cured himself of a very serious case of anxiety using a method very similar to this. His name was Earl Haney and he had ulcers. Bad ulcers.

One night Haney had a hemorrhage and was rushed to the hospital where he stayed. He had holes in his stomach lining and had to have his stomach pumped every day. His diet was alkaline powder and a tablespoon of half-and-half per hour. He was in bad shape.

This continued for several months. His weight dropped from 175 pounds to 90 pounds. Three doctors agreed he was terminal. Death was inevitable. He was basically waiting around to die.

Then a thought dawned on Haney. He realized he had always wanted to travel the world before he died and he figured if he was going to do it, he’d better go now.

Of course, his doctors were strongly against the idea. Haney would have to pump his own stomach twice a day. Crazy!

Haney went ahead with his plans anyway. He even bought a casket and took it with him so if he died on the way, he could be buried in the family plot back home.

He boarded a ship from Los Angeles to visit China and India. During the voyage, he gradually gave up on all the pampering and stomach pumping. He let it go. If he was going to die, so be it, he thought. His worry and tension evaporated. He stopped worrying.

Even during a typhoon, which should have scared him to death, he actually enjoyed it because he had already looked at the “what if.” It didn’t bother him. He’d looked at the consequences already: He would die and his body would be sent back to Nebraska. His alternative was wasting away in a hospital, and he’d much rather die in a typhoon on his way to China.

He started really enjoying himself now that he was free of constant worries, and he gained 90 pounds on his trip. His health returned. When he got home, he went back to work and never felt better in his life.

He was cured. He stopped cowering in fear at what might happen. He had learned to take an honest, unflinching look at the likely consequences of possible negative events. The constant worry evaporated into the thin air it was made of.

You can have the same sort of recovery from your worry. Think about something you have worried about recently. Now ask yourself, “What if it happened?” Really. What if it happened? What would you do about it? How would you respond? And then what would happen? And then what? And how would you respond to that? Follow it through as realistically as you can and see if that doesn’t have a dramatic effect on that particular worry.

When your own distress is making things worse, go ahead and confront the worst that could possibly happen. Don’t just do it briefly. This isn’t positive thinking. Don’t merely tell yourself, “Oh, there is nothing to be afraid of, everything will be all right.” That won’t work! Imagine the worst case scenario clearly in your mind. Imagine what would happen. Imagine time passing. And be realistic. Don’t try to be optimistic with your imaginings. Try to imagine what you really think would happen.

What you will discover is that this is not the calamity you feared. And your increased calm will help make a calamity less likely.