The following was an email message from Fuel Freedom Foundation: 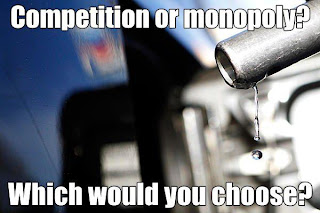 Nobel Prize-winning economist Milton Friedman said that “the great danger to the consumer is the monopoly.” True to his famous words, consumers are once again threatened by the oil monopoly and actions forced by its chokehold on our transportation.

One underreported factor contributing to unseasonably early, skyrocketing gas prices is oil companies abandoning their refinery operations to feed their drilling and exploration divisions. This development has alarming consequences for our economy and we have little power to respond to this issue as long as viable replacement fuels are barred from competing on an equal footing with oil.

Refinery closings lead to the immediate loss of direct and indirect jobs in the local economy.

Refinery closings in Hawaii and New Jersey are causing residents of those states to increasingly rely on imported gasoline and other refined petroleum products to meet demand.

Since most food and consumer retail goods are transported throughout the country, higher gasoline prices increase inflationary pressure on the price of these items.


Friedman also said, "The most important single central fact about a free market is that no exchange takes place unless both parties benefit." Surely, companies should be permitted to do what they can to succeed, but in a monopoly, the absence of free-market forces means that one side benefits all the time while the rest of the economy always loses. As long as the oil monopoly stays intact, the consumer and the economy at large will be put in danger by every action the oil industry takes.

Let’s bust this trust, once and for all, with replacement fuels. Ethanol, methanol, natural gas and electric vehicles will create a free market for transportation fuels and save us from the predatory pricings of big oil.