Change How You Think (As Opposed to WHAT You Think) 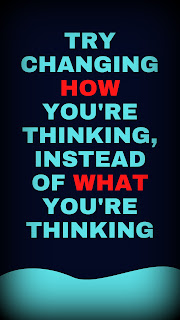 For example, when you talk to yourself, you can change WHAT you say to yourself. We all know that. And it's helpful. But you can also change HOW you talk to yourself. You can keep your thoughts exactly what they already are, but change the tone of the voice, or the volume. You could try to discover from where the voice is coming, and change that. Some people feel their voice comes from behind their head, or inside their head. You could imagine the voice coming from your thumb, for example, and see if that changes how that affects you.

This is changing HOW you think something. In this case, you're changing it auditorily. You can also change something visually. Often, our thoughts have a visual component.

Let's say you're worried about an upcoming interview. You’re looking for a new job. You imagine yourself blowing the interview, or worry that they’ll say they’re not interested in you. You could try to imagine something different. That’s changing WHAT you’re thinking. And that’s good. That’s a good idea. But what about changing HOW you’re thinking it? For example, if you imagine being in the interview and being nervous, imagine the same scene, but alter it. Add a soundtrack. Make it brighter or dimmer. Imagine the person interviewing you is only one foot tall with a really squeaky voice. Imagine your best friend is sitting next to you at the interview. The possibilities are endless. Some of these won’t make any difference in how you feel, but some will, so you can do more of THAT. And just the fact that you’re no longer a victim to your own thoughts makes a difference, even if the changes themselves didn’t change anything.

When my son was way too young to be watching such things, he was at a friend's house and watched a movie called A Nightmare on Elm Street. Afterward, he had nightmares about Freddy Krueger, a serial killer "who uses a gloved hand with razors to kill his victims in their dreams, causing their deaths in the real world as well," according to Wikipedia. I've never seen the movie, but I've seen pictures of Freddy Krueger, and he's a freaky looking dude. The perfect thing to give a young boy nightmares.

So we talked to him about the guy's freaky face. We said, "Imagine he has big donkey ears. Imagine them putting all the makeup on his face to make him look like that." We had him play with the images in his head. To shrink them down. To make them move away from him, etc. And his nightmares stopped.

There are so many ways to use this principle. One of the things you can do with visual images is look at the same scene from a different point of view than your own. I don't mean metaphorically, but literally. It's called dissociation. To get the difference, imagine that you are eating an ice cream cone. You're holding it in your hand in front of you. You bring it up to your mouth and lick it.

Now imagine you are standing next to yourself looking at yourself eating an ice cream cone. This is being dissociated. You're not looking out from your own eyes; you're seeing yourself from the outside. This is usually a powerful change in visual imagery. It changes your emotional reaction. While you're seeing out your own eyes, the emotions are stronger. Looking at yourself from the outside makes it all feel more distant, and so the emotions are not as intense. This is one of many things you can change in a visual image.

Click here for a list of things you can try changing in visual imagery. And click here for a list of things to change auditorily (having to do with sound). This idea of changing how you're thinking rather than what you're thinking comes from NLP, which is a kind of system of psychology. A really good book on the subject is, Using Your Brain — For a Change, by Richard Bandler (one of the co-founders of NLP).

The way to play with this is to just try different things and see what makes a difference. Not everything is important. Some changes make a big difference and some don't make much difference at all. For example, location often makes a big difference, both auditorily and visually. For a visual memory, you might try changing the color, the size, the clarity, and maybe none of that makes you feel any different. But changing where the image is in your mind's eye might dramatically change how it feels to you.

There are so many things to try. You think all the time. You have images in your mind, and you say things to yourself and imagine other people saying things to you. And you hear music in your mind, and other sounds too. All of this happens without any effort on your part, and seemingly out of your control. But at any point, you can do whatever you want with these thoughts (except stop thinking them, which you can read more about here).

I was out on a walk once, feeling kind of discouraged about one of my goals, and I thought it was a good time to experiment. I imagined people singing. I imagined the park I was walking through lined with people I know on either side of the walkway, singing to me. It was an inspiring gospel tune, but I changed the words. They were singing, "Don't give up! You can do it, we know you can!" Within five minutes, I was feeling thoroughly inspired!

If this all seems too elaborate, you've got to keep in mind that you are already visualizing things and talking to yourself. But in a sense it's being done to you. All I'm suggesting here is that you do more of it deliberately, and in a way that would help you, rather than just letting it happen the way it happens whether it helps you or not.

Here's another example: I have woken up from a bad dream before, thought about it for a second, and then went back into the dream to finish it the way I would like. So I find a weapon, or I call on friends of mine to help me. It's my mind, and I can do what I want with it. So I go back in and walk away from the dream victorious.

I once helped a friend get over his fear of talking to attractive women. I had him closed eyes and imagine (whenever he sees a woman he's attracted to) hearing her say to him through mental telepathy, "I want to get to know you." I had him imagine this several times with different images of women. And he said it worked. He is now married.

If you're walking into an interview for a new job, imagine your favorite upbeat song is playing loudly, making you pumped up and feeling good.

Bandler says Stephen King gets motivated to write his bestselling novels by imagining a scary voice coming down a tunnel from far behind him and coming right up to the back of his head and yelling loudly, "Get to work!"

Your brain is coded. Everybody organizes their internal experience in a certain way. Nobody taught us to do this, but we naturally do it so that we know what is the past and what is the future, for example. You code your inner experience so you know what's important and what isn't, what has emotional significance and what doesn't.

Everybody has different ways of organizing their internal experience. For example, how do you know an image in your mind is from the past or from the future? There's some way you code it. Nobody teaches you this, you just figure it out over time, or more like it figures itself out. But you can sometimes discover how someone organizes their mind by the way they speak. For example, if someone says, "I put it behind me" or "I left it all behind," the person probably organizes their images front to back. The future is in front of them, their past is behind them.

You can watch the way people gesture when they say, “I used to do that.” If they gesture to the left, they probably organize time side to side and their past is to their left, their future is to their right. This might all sound like something interesting that doesn't make any difference. But careers have been shattered and married people have divorced because of these things.

For example, a couple I know had been separated for several years and during that time the man had sexual relations with several women. When the couple got back together, the woman could not get those images out of her mind. It tortured her. Every time they began to be intimate, she mentally saw those images and it made her upset and angry.

She wasn't doing this on purpose. She didn't want to imagine these images. Her mind did it on its own.

Most people wouldn’t think to play with their mind or experiment with different ways of visualizing something like this. Most people accept the way their mind naturally does it, even when they feel tortured by it. But there are things she could have done with these unwelcome images. You can think of some right now, I'm sure.

She could have imagined the images on a big glass screen, and then taken a sledgehammer and smashed it. And then see a big sweeper push it into a smelter of molten glass.

Instead, she couldn't take it any more and she left.

This idea can make a huge difference.

When my mom was dying of cancer, she had terrible nightmares. She had been diagnosed with a very aggressive cancer, and she was scared. She asked me to help her, and it means a lot to me that I was actually able to help her.

I said, “We will all be there, surrounding you, protecting you. You can say to whatever is threatening you, “if you want to get to me, you have to go through my whole family.” This really amused her. I told her this whole thing on two different occasions about one day apart. And after the second time, her nightmares stopped. I don't think I'd ever been so grateful for a book I'd read.

This idea has many meaningful uses. There is no natural limit to how many ways you can use this to help someone else or to help yourself. As simple and effortless as it is, it can make a really big difference. I urge you to use it, and to try to remember it. I'm going to be doing a podcast about this, so you can listen every now and then as a reminder. Follow my podcast here.

Adam Khan is the author of Antivirus For Your Mind: How to Strengthen Your Persistence and Determination and Feel Good More Often and co-author with Klassy Evans of How to Change the Way You Look at Things (in Plain English).
Posted by Adam Li Khan at 1:08 PM