Direct Your Mind: How Can I Use This To Accomplish My Goal? 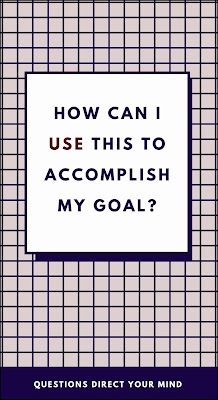 One of the best ways to get your mind to work for you rather than against you is to ask yourself a good question. Read more about this principle here.

For example, when I first started speaking in public to promote my book, I got pretty nervous. I had never done much public speaking before. I tried many things to deal with it, but the one that worked the best was using the nervousness to help me accomplish my goal.

Originally, I decided that each adrenaline jolt would be my cue to go over the speech outline in my head. That worked pretty well. I stopped dreading the nervousness and stopped trying to avoid having it. An adrenaline rush became a welcome opportunity to make sure I knew exactly what I was going to say. This directly countered my main fear — that I would lose my train of thought in front of the group.

I got the general principle: To use the feeling of anxiety to remind me of something. I tried out several things. The one that worked best was saying to myself, “I will make them get how important this is.” That’s what I wanted to go through my head as I stood in front of an audience. I practiced that thought over and over whenever I experienced an adrenaline rush.

And while I practiced saying this to myself, I imagined saying it to myself while looking at the audience, so the audience became associated with that thought — the audience itself became a trigger for that statement or thought.

I came up with this after doing a few speeches. I noticed the audience listened with the attitude, “this is interesting.” But I wanted them to sit up and pay attention to what I was saying — as if it could help them or someone they loved, as if it would make a difference, as if it were important! I wanted to have a real impact on them. I wanted their lives to be forever better. I didn’t want them to listen to me as a mere form of entertainment. This was something I really wanted. It was a sincere, heartfelt desire. And that was the key.

So every time I got a jolt, I would say to myself, “I will make them get how important this is!” And thanks to the jolt, I said it with extra intensity.

In other words, I used something that seemingly was against my goal, and I used it in service to my goal.

Whatever happens that seems to directly hinder you goal, try this question on it. Ask how you can use your barrier to help you with your goal.

For example, let’s say a man has a goal to become a manager. He works as a clerk. He works a forty hour week. That’s forty hours of not being able to write resumes, take training, or in any way move forward toward his goal. True or false?

He asks himself this question. He is working as a clerk, and he thinks of that as a barrier. So he asks how he can use working-as-a-clerk to help him accomplish his goal. For several days he asks this question and so far hasn’t come up with any good answers. But then today he realizes that he interacts with his manager occasionally throughout the day.

“Maybe I could see what he’s doing right and what I would do differently if I were manager,” he decides. That’s a good idea. Then he realizes that as a clerk he deals with people all the time. Maybe he could improve his general ability to deal with people and that would help him become a better manager.

And now he’s on a roll. He realizes that he casually talks with people all the time. Maybe he might find out about management opportunities.

Maybe he could talk to his manager about managing, asking him, for example, if he had it to do over again, is there anything he would study before he started managing?

He is limited in what he can do while he is at work because he has to do his clerking job. But he could find leads, come up with ideas, and so on that he could pursue on his off-hours. And when he gets home he could make notes, keeping a notebook on what he saw that worked and didn’t work about what his manager did.

He could make notes of what it is like as an employee to be on the receiving end of the way his manager deals with him, and that could help him in the future when he’s a manager and has a manager’s point of view and starts to forget the employee’s point of view, etc.

The point of this question is to get you thinking. When something seems to be interfering with your goal, ask yourself if you can somehow use it to help your goal. Sometimes you will come up with brilliant ideas.