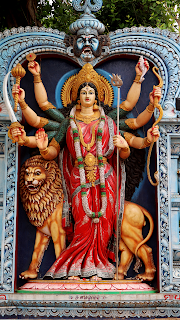 On vacation many years ago, I was reading the Bhagavad Gita, one of Hinduism's holy books. It is basically a conversation between Arjuna, a charioteer, and a spirit. The spirit is urging Arjuna to let go of his attachment to the outcome of the upcoming battle. And all throughout the book, there is a continuous urge to let go of your desires, to give up desiring.

Crazy idea, I know. But I was on vacation, and I thought of something I'd like to try, so I tried it. I did a kind of meditation that lasted for several HOURS. I normally fidget a lot and have a hard time sitting still for long periods, but without any goal to sit still for so long, I was quite content to stay sitting there for hours. And all I did the whole time was to notice when I had a desire, and then decide to let that desire go.

But I did have some control after that point. I can decide on a desire or not. I may have the desire to have a beer, but then I can decide, "nah, I don't really want one, now that I think about it."

So that's all I did for several hours. I payed attention to when a desire came up, which was several per minute, and then decided to let the desire go. I simply decided No, I don't really want that now.

That was one of the most deeply peaceful experiences I have ever had in my life. I achieved a kind of bliss I didn't think was possible without heavy medication. I was totally peaceful. I was completely at ease. I had found bliss and tranquillity.

Now of course, most of my life is oriented toward goals, and that's the way it is. I don't want to simply sit and live in peace without doing anything worthwhile. But I know that any time I want to descend into the well of deep peace and quench my thirst, I have a way.

Adam Khan is the author of Principles For Personal Growth, Slotralogy, Antivirus For Your Mind, and co-author with Klassy Evans of How to Change the Way You Look at Things (in Plain English). Follow his podcast, The Adam Bomb.
Posted by Adam Li Khan at 3:41 PM