Imagine a Single Celebration That Includes Everybody 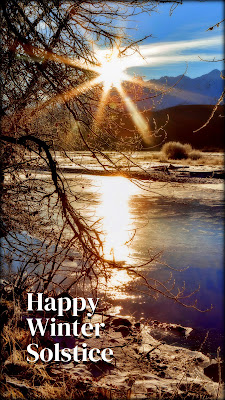 The origin of the word "solstice" is the Latin solstitium from "sol" meaning sun and "-stitium" meaning a stoppage. Observing the sun over time, you can see the sun rising further and further to the south until the winter solstice, when it slows and stops and then reverses.

The winter solstice in the northern hemisphere is close to the same time as Christmas, and many of our Christmas traditions originated from the days before Christianity, when the solstice was celebrated. Traditions for celebrating the end of shorter days and the beginning of longer days (winter solstice) have been practiced around the world for many thousands of years.

At Stonehenge on the British Isles, for example, the huge stones are arranged in such a way that they frame the setting sun on the day of winter solstice. The ancient Brits had a tradition of tying apples to the branches of oak trees in the dead of winter to affirm that summer would come again. The Celts put mistletoe on their altars.

The ancient Romans celebrated the winter solstice by giving gifts. And they feasted for a week. Servants traded places with their masters — the masters serving their servants during the feast. They also had a tradition during winter solstice of bringing evergreens indoors.

In Scandinavian countries, the sun disappears in the dead of winter. In the far north, it disappears for as long as 35 days. The ancient people of the far north had a tradition of feasting when the dark days were over and the sun once again shone on the horizon. They celebrated with what they called a Yuletide festival. They feasted in a long hall while a Yule log burned in the fireplace. They thought of mistletoe as sacred. Kissing under mistletoe was a fertility ritual. Holly berries were considered to be the food of the gods.

The solstice celebrations were officially replaced with Christian ceremonies during Roman times as a way of overtaking the ancient traditions, even though Jesus probably wasn't born in December. It was a political act. December 25th used to be the solstice with the old calendar. It usually happens on December 21st with the modern calendar.

We could keep our celebrations, but change the date, and that way more people could celebrate together. In other words, if you normally drink eggnog and trim a tree and open presents for Christmas, you could do exactly the same things, except do them on the Solstice. Or people with different customs could celebrate their customs and traditions (for Christmas, Hanukkah, etc.) on their designated days, but also celebrate the solstice with everyone.

The solstice has nothing to do with religion, race, or nationality. Every one of us relies on the sun for our warmth, our sunlight, and our food. We rely on the sun for life. The time and date of the solstice can be accurately determined and it occurs at the same moment everywhere on earth.

The solstice might some day become an international holiday. This could be the beginning of something wonderful — a point of unification, a place of agreement, a universal tradition.

You can begin this year by celebrating the solstice in even a small way. Take any of the traditions normally associated with the holiday season and do some part of it on the solstice. Give a gift. Eat a feast. Be kinder to your fellow human beings. Invite people of all faiths to your home to celebrate the end of the longest night and the beginning of longer days. The celebration of the solstice in your own home could actually and concretely work for peace on earth and goodwill toward all women and men.

I wish you a Merry Solstice.

Adam Khan is the author of Self-Reliance, Translated, and co-author with Klassy Evans of How to Change the Way You Look at Things (in Plain English). Follow his podcast, The Adam Bomb.

Email ThisBlogThis!Share to TwitterShare to FacebookShare to Pinterest
Labels: Relationships