How to Stop Grasslands From Turning Into Deserts

Some of the land on earth is humid and moist year round. On this kind of land, you could burn ten thousand acres to the ground, wait until grass grows on it and then overgraze it until the land is spent and dead, and if you then simply left it alone, the jungle would grow right back. On this kind of land, you can't create bare ground for any length of time without constant weeding. Whole cities in the jungles of Mexico, complete with giant stone pyramid structures, have been swallowed up so completely by the jungle that new cities are still being discovered.

Another significant portion of the land on earth is dry for part of the year. Much of that is grassland, which is the largest ecosystem on land. On grassland, if you burn it and/or overgraze it, many environmentalists and ecologists once believed (and many still do) that you could also just leave it alone and it would grow back. But for more than 60 years, that method has been tried in many places all over the world, and what happens? The land slowly turns into desert. It does not recover. The question is why?

This is a very important question. About 70 percent of grasslands have either turned into deserts or are in the process of turning into deserts. In satellite photos of the earth, the green areas are moist year round. The tan areas are turning to desert, and this process has been a large source of climate change itself because all that life that died sent its CO2 into the atmosphere. So this is a problem that must be solved, and soon.

A basic evolutionary fact has been staring scientists in the face all along. These tan-colored places are (or were) mostly grasslands. And what do you always find on thriving grasslands? Large, hoofed animals grazing on the grass — buffalo, zebra, gazelles, wildebeest, etc. The grass and the animals evolved together, much like bees and flowering plants. They evolved to rely on each other. They developed characteristics that are adapted to each other.

The reason this was not apparent is that once the naturally-occurring hoofed animals were gone from a particular area, they were immediately replaced by domesticated hoofed animals, and these were clearly overgrazing and killing the land. So the obvious solution was to ban domesticated animals from damaged or endangered land areas so the land could recover. So huge plots of land have been made off limits to grazing animals for long stretches of time. But as I said, the land does not recover. It begins to die. And the bare ground spreads until it looks like the barren plains of Iraq.

Domesticated animals made the land turn into desert. But leaving the land alone also made it turn into desert. The biologist Allan Savory has found an answer to this puzzle. The answer is counter-intuitive. It didn't really matter which animals were grazing. The key was HOW the animals were grazing. If the hoofed animals graze in a particular way, the grass grows and the deserts turn back into rich grassland. If they graze in any other way, or don't graze at all, the land turns into a desert.

Savory's answer is this: For a grassland to be healthy it requires herds of hoofed animals to graze on it. But they must graze in a natural way, which means: 1) all bunched up as grazing animals do (for safety in numbers — safety from predators), 2) never staying in the same spot for very long, and 3) not coming back to that spot for a while (which allows the grass to grow back). If you graze the animals that way, it doesn't matter which hoofed animals are doing the grazing — wild or domestic, or both — the grass begins to thrive.

Thriving grass has many impressive and meaningful consequences. First of all, grass captures moisture. On bare earth, rain runs off (washing away topsoil) and evaporates. When the ground is covered with grass, the plant roots and other living organisms in the soil soak up the water and hold it. The grass does the same with CO2, removing it from the air and sequestering it in the earth. Grass also cools the atmosphere and prevents soil erosion. It prevents contamination of groundwater and surface water (because it needs no artificial fertilizer or pesticides). It turns the falling sunlight into abundant food. And grasses are the foundation of entire ecosystems, so diverse plants and wild animals also get what they need to thrive. Thriving grassland increases biodiversity. 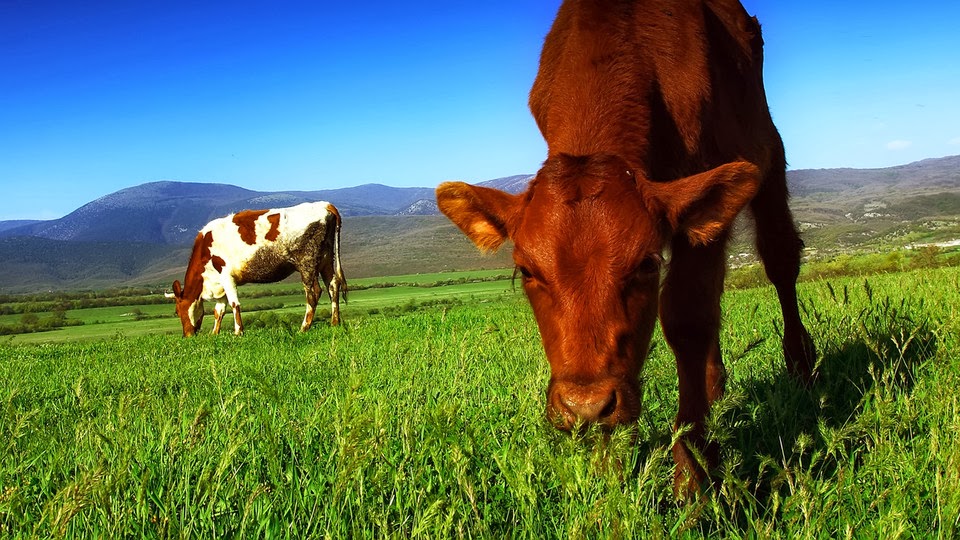 Experts have estimated that using grazing animals in this way on only half of our barren or semi-barren grasslands would remove so much carbon from the air that our atmosphere would be like it was before the industrial age began.

In a natural setting, two forces working together cause hoofed animals to graze the right way: predators and disgust. The presence of predators causes scattered grazing animals to bunch together in a big herd. They eat the grass and, of course, urinate and defecate. After a couple of days of this, they are compelled by their noses to move to greener pastures. So the ground gets thoroughly and regularly "tilled" and "fertilized" and then left alone for a while. And grasses flourish. When the grass has grown tall, it lures the animals back into the area to do it all again. If the animals don't come back, the tall grass rots and smothers any new grass trying to sprout. That's when bare ground begins to form.

Huge parcels of the earth have been turning to desert because we haven't understood how this works. All over the world — from Australia's outback to the Northern Rockies to Zimbabwe — Allan Savory and his teams have proven beyond a shadow of a doubt that when these principles are applied, the deserts disappear. The land turns green. Wildlife returns. Plant diversity proliferates. Birds start singing. It's a beautiful thing. Watch this TED talk to see some photographs of the kind of transformation these principles bring into being. Well over forty million acres of land are now being grazed this way (called Holistic Planned Grazing).

Think about the consequences. More food can be generated with less water. Instead of draining the Colorado river to grow lettuce in the Arizona desert, for example, livestock could be raised instead. The grass would capture the little bit of rain that falls, and hold it and grow into food for livestock. The meat from this livestock would be healthier to eat than grain-finished beef.

Using grazing animals correctly, the grasses grow deeper roots over time, sequestering more carbon and holding more water, preventing runoff, preventing the loss of topsoil from wind and rain, and protecting the plants and animals from dying off during droughts.

But, you might be thinking, don't all those hoofed animals create methane? And isn't methane a powerful greenhouse gas? Yes to both. However, the alternatives are either bare ground that produces no oxygen or food but produces excess heat...or the grass goes uneaten, so it rots, producing methane. The bacteria can either break down the grass inside a grazing animal or outside it. Either way, you get methane.

But for the reduction of greenhouse gasses, shouldn't we focus on getting alternatives to petroleum fuels? Yes, but not exclusively. The desertification of the land also produces copious amounts of atmospheric CO2. So even if we got rid of all fossil fuels, these lands would continue to turn into deserts until grazing herds return. We should, however, also find alternatives to petroleum. Click here for one possible way to accomplish it quickly.

In some places, people working with Allan Savory are using domesticated animals mixed in with the wild animals to make the herds bigger (bigger herds work better for grass than smaller herds), and both the domestic and the wild animal herds grow healthy and multiply because the process makes each acre produce more grass. Considerably more. Another good reason to manage the wild animals along with the domesticated ones is because in many places humans have wiped out the predators, and without the predators, grazers stop bunching together and the grass starts dying.

Here's where to start: Sign up for updates at the Savory Institute and Holistic Management International. Like them on Facebook (Savory Institute here, HMI here) and share their posts. You'll find plenty of opportunities to get involved. At the very least you can help make this information more widely known, and that will make a difference. You can do the same for our Facebook page (here).

One simple and practical thing you can begin immediately is to buy only beef and lamb that has been grazed using Holistic Management. Support that industry. Put your money where your mouth is. Find out how to know if your meat has been grazed regeneratively: A New Choice For Consumers: Regenerative Organic. Also: Applegate Farms Announces It's Joining The Regenerative Agriculture Movement.

The Savory Institute has a certification program now (certifying that the meat was grazed Holistically), and more and more companies are getting certified all the time. You can track that here: Land to Market.

This is all extraordinarily good news. Desertification of the earth can be reversed, and it can happen very quickly. The land starts to noticeably recover in the first year. To achieve it, we need more animals, not less. Sometimes for the process to work, Savory has discovered he needs to increase the herd size by 400% or more. Grasslands need herds. Humans can make it happen. People are already doing it. The end result is a healthier planet, healthier animals, more food, and healthier humans.

Listen to a podcast about this: Literally Saving the Earth by Regenerating Grassland.

Adam Khan is the author of  Principles For Personal Growth, Slotralogy and Self-Reliance, Translated. Follow his podcast, The Adam Bomb.
Posted by Adam Li Khan at 12:59 AM