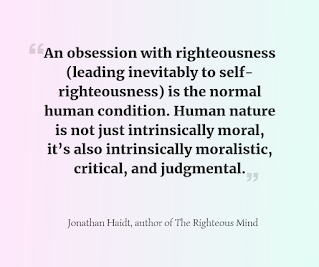 Presidential elections are coming up. If that means uncomfortable conversations, or strife between you and family members or people you work with, or even just frustration at how members of the "opposing party" could possibly be so stupid, I've been doing something I'd like to share with you that creates a feeling of common ground rather than division.

It comes from an article in Scientific American Mind on the differences between liberals and conservatives, mostly about research by Jonathan Haidt, the author of The Righteous Mind. It seems counterintuitive that delving into the differences between liberals and conservatives would bring people together, but that's exactly what happens.

Several times now, when I've gotten into conversations with people about politics and the conversation started feeling divisive, I brought up some of Haidt's findings, and it shifted the conversation because his discoveries point to an important fact: Conservatives and liberals have a lot of common ground, and often share values. The priority of those values may be different, but they often both recognize that those values are important.

For example, in one study, when they showed people collages of photographs, conservatives' eyes spent more time looking at the more disturbing or unpleasant images in the collage. Many studies have demonstrated, in one way or another, that conservatives are more alert to threats, but that doesn't mean liberals are necessarily cavalier about safety and security. They may differ on their thresholds — differ on how bad it has to be before they are alarmed enough to do something about it — but they still care about it.

Conservatives are more anxious than liberals, generally speaking. That's one of the reasons they resist change. They want things to stay stable because change can be scary, and sometimes things change for the worse, not the better. Again, this is a sliding scale, not a black-and-white (or should I say "blue-and-red") division. Liberals also feel anxiety, just not as strongly as conservatives. And the feeling of safety versus anxiety is not fixed in any given person. In the SciAmMind article, the author writes:


Haidt's work suggests that we all share six basic, inborn moral values, which are then influenced by culture and experience. The six values are:

Liberals tend to care more about some of these and less about others. Conservatives are just the opposite. What I think you'll find when you look at the studies is that the point of view of both right and left are necessary, rather than one being right and one being wrong, and that is an insight that can help bring us together.

So that's my recommendation for improving your mood during election season. When the conversation starts to feel divisive — even if you're talking to someone you agree with, but it starts feeling like "us versus them" — bring up some of this research. Just say something like, "I was reading an interesting article," and share some of the research findings. I think you'll find it improves your mood and the person's mood you're talking to. Maybe we can build more bridges between us this way.

Explore your own morals here: Test Your Morals.

Watch a TEDtalk with Jonathan Haidt: The Moral Roots of Liberals and Conservatives.

And here's another video, this one of Bill Moyers talking with Haidt: How Do Conservatives and Liberals See the World?